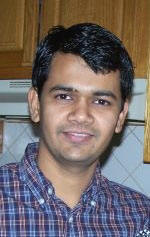 MBS in Building Science 2006 from the University of Southern California, Los Angeles, USA,

BS Architecture from MS University, Baroda and a registered Architect with the Council of Architecture, India and American Institute of Architects, USA and a LEED accredited professional, USGBC, US.

Mr. Sumit has over 6 years experience in the field of architecture covering a broad range of activities including project coordination, supervision, designing and preparation of energy efficient building design and construction documents.

He is helping the company with the technical experience for various research projects, difficult task management and new ventures.

He has been involved in the development of plans, renderings and elevations for various building types including recreational, athletic, educational and civic facilities. His research and published work has focused on sustainable building including geothermal and renewable energy, solar energy and passive and low energy architecture all over the world. He is highly proficient in the use of specialized computer programs including Building Energy Simulation Software such as PVSol, TSol, E-Quest and HEED as well as AutoCAD 2008, MS Office Word, Excel, PowerPoint, Photoshop and 3ds Max R6.0, among others.

He has designed ‘AVIN Geothermal and Renewable Energy Research Center’ for Avin. That is a sustainable building, generating all its energy needs on its own is under planning. He has also worked as team member with six other students from Uni. Of Canberra, Australia, on preparation of an overview report of current situation and desired future visions for Dundload. The whole report was prepared under guidance of Ar. Nimish Patel & Parul Zaveri of Virasat Foundation.

The world is going green: it has to.

India too is focussing on green buildings and it will be mandatory for builders to obtain certification from the appropriate bodies for all their construction projects.

In the coming years Sumit will be playing a leading and major role in this arm of our business: design and certification of green building and developing green building projects.

Company established by Mr Avinash Brahmbhatt. Operations of the firm date back to 1969 when the firm was engaged in manufacturing and marketing of chemicals, petrochemicals, engineering goods and electricals. In 1980 the firm entered the field of non-conventional energy.

Made with and passion by metR